One of the more unusual maths games on this list, Frog Fractions appears to be a game whose purpose it is to educate, that is until you play through a little bit of its gameplay. You start off by playing as a frog, using the mouse to target bugs that are flitting in from above to eat your fruit. You can upgrade your targeting/shooting as you make progress, but the game has a number of different sections involving travelling to a Bug Mars for a variety of different adventures that involve gameplay that treads the waters of a few different genres.

There really isn' that much mathematical trouble to get into with this one, simply a well-designed parody of old-school educational games from developer Twin Beard. 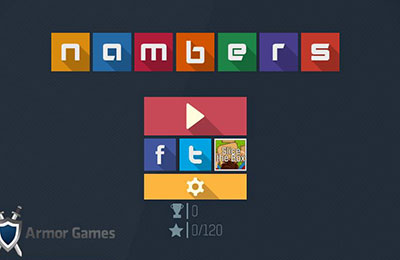 Not simply a typographical error gone astray, Nambers is in fact a rather unique maths game for the flash platform. It’s another grid-style game, though its slick and colourful design makes it a little more professional-looking than many basic flash games. The goal is to make the grid look like the target one at the bottom of the screen.

The mechanics include the ability to select and scroll the numbers on each tile from numbers 1-9, and also the restriction of stacking or arranging a number of adjacent tiles so that the number of tiles arranged corresponds to the numbers displayed by the tiles (so a stack of four with 4 displayed, a stack of 2 with 2 displayed and so on). Once you get going it’s quite an addictive experience to say the least, and the soft music adds to the casual nature of the gameplay.

If there was ever a game that managed to fuse logical mathematics-based thinking with tactical gameplay where the aim is to take over the world, then Warlight would be it. With well over two million plays on Armor Games, Warlight’s gameplay is very similar to that of Risk Online: you are presented with a map and must use the confines of its movement to try and take over it in its entirety.

The addictive thing about Warlight isn' its gameplay format however, but the social aspect as you can play the fantastic multiplayer version at https://www.warlight.net/ as well as enjoy the experience on iOS, Android, and Kindle.

If you think that maths games are a little too educational to be entertaining, then you’ve fallen prey to one of the most basic of false assumptions. Just because games are based on maths doesn’t mean that they are intended to be strictly educational, and even if you do happen to sharpen up your maths skills as a bit of collateral “damage” from all of the fun in these games, then what have you really got to lose? You haven' experienced true addiction until you’re 10 games deep into tile-based maths masterpiece 2048. You also don' know true mobile-based maths merriment until you’ve gotten your head around Zero Sum. There are even strategy-maths games in the form of Warlight to tickle your fancy, so without further hesitation, here are the best maths games for you to try.

If you can add up to 9 then you’ll be able to tackle this fun tile game. A little different than 2048 in its approach, Drop Sum V2 marks a return for the Drop Sum fame with an improved interface and gameplay that’s smoother than ever. The gameplay involves being presented with a blank grid and your success hinges on your ability to drop the numbers that gather at the top of the screen in such a fashion that adjacently-placed ones add up to 9. The idea is to create groups, with multiple groups leading to an explosion that clears surrounding numbers and scores you points. This one’s probably the most maths intensive game on the list yet, and you can play the latest version at Kongregate.

If you’re perhaps after a more multiplayer-oriented maths-game experience, Zero Sum is available for iOS. Intellectually, the concept of the Zero Sum game isn' a new one, but this particular game involves competing against real-life opponents in order to connect sequences of numbers that ultimately add up to zero. Not only does this test out your skills regarding the adding of negative numbers, it also puts you up against a time limit of two minutes per game, making it as much of a tense experience as it is an educational one.

There’s a nifty tutorial on hand if you’re the kind of player that learns by doing, and with a supremely clean interface that’s simple and professional, Zero Sum has to be one of the most brainpower-intensive no-brainers out there on the App Store.

Back to the flash gaming world now with Sum Tracks, a game that bears the format of a classic puzzle game, only with an interesting twist to make it unique. Sum Tracks is comprised of a hefty 45 levels, each requiring that you use the mouse to drag square number tiles in a certain manner over the round number tiles. Each square number tile has a fixed number in it that you must subtract down to zero, with each circle-number tile subtracting its total from that of the square number. It’s really just a case of choosing the correct order and track path to drag the tiles across, but it soon becomes quite the headscratcher.

In a similar vein to Sum Tracks, Sum Points requires of you the ability to perform some basic sums in order to get the value of the target tiles to equal zero. In order to do this you must pay attention to the format of the grid, with the diagonal blue dots subtracting two in a diagonal fashion whereas the red squares subtract two both horizontally and vertically.

The background music makes this a very relaxing experience, placing Sum Points firmly in the “soft puzzle” category while still requiring that you do a bit of thinking in order to solve the puzzles at hand. Play Sum Points at Armor Games.