A Simple & Fun Blend of Maths and Puzzle Solving

Forget about anyone that tries to pass off 2048 as an educational game. This would be to sell it short as on the whole, educational games aren’t usually the best when it comes to innovation or general gameplay. No, 2048 is a different beast that isn’t as much educational as it is downright addictive. It’s a tile game – the genre has existed for many years with multiple spins on the same concept – that involves a lot of load of sliding as you embark on a puzzling adventure that has you constantly trying to merging two tiles (which always come in multiples of 2) into one in order to create a single tile that has the value of the sum of its constituent tiles. Very simple in its approach, wouldn’t you say?

This outright simplicity may not sound like an innovative experience to many, but it would defy logic to see anyone play a few rounds of 2048 and not get addicted to the game. Its simplicity only helps it become more fiendish. Anyone can play it, and you probably will. Over and over. And over.

The gameplay of 2048 is so simple (and its success so contrastingly vast) it will make you wish you’d thought of the concept first. It’s a tile-based game where swiping the screen left, right, up, and down will shuffle all of the available tiles on the 4x4 grid in that direction. It’s in the way that the tiles behave that 2048 gets its ferocious addiction potential from however.

Much like with 2048 online, you begin with two tiles that contain the number 2. Swipe them into each other and they’ll merge, making a ‘4’ tile. Now you need to get a ‘4’ tile to merge with this one to make an 8, and so on until you’ve managed to beat the game by making a tile that as the value of 2048.

This is easier said than done however, since you’ve only got 16 squares’ worth of room on the board, and each swipe introduces either a 2 or a 4 tile with it. This means that the board fills up quickly and you have to then keep on top of trying to merge the available tiles into as large a value as possible to both rack up the points and also clear up some space for new tiles. This leads to a vicious cycle whose only negative outcome is the amount of time you’ll want to waste at work playing it at lunchtime (and during work hours as well).

Aside from the gameplay, there’s not really much to cover in terms of graphics since its concept is as simple as the aesthetic. Gabriele Cerulli’s version (this is the inventor of the game – all other games are simply copies of this original) has a clean and simple interface, with Classic and Time Trial mode-selection buttons occupying the main menu and a minimalist approach to the colour scheme (it is largely white and brown with yellows and orange/reds offering pleasant-looking contrast)

There could be a few improvements in this version, such as the game board occupying the whole screen and not just part of it. Swipe responsiveness isn’t immediate either, causing minor delays between your swipe and the results. 2048 Pro from Digiplex is an example of a version that is a little more responsive and generally better suited to the mobile platform.

To sum up, 2048 really is as addictive as you’ve heard everyone talk about. Its concept is simple to understand yet unbelievably difficult to fully master when compared to https://www.mathplayground.com/math-games.html games. Its interface is clean and simple, and you also don’t need to pay for any in-game currency or for the app itself. It really is a no-brainer, though it does require a fair bit of brains if you’re going to beat it! 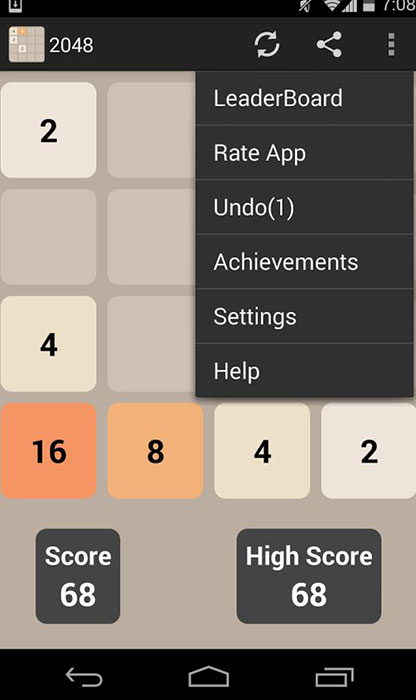